Class. Elegance. Panache. These are probably the words most often associated with Hashim Amla’s batting during his heydays in international cricket. Just days after his teammate Dale Steyn called it a day, Amla has decided to hang his boots as well, and he too leaves the game as one of the modern-day greats – across formats. He retires as Proteas’ second-highest run-getter in Test cricket and third highest in ODIs, having hit the most hundreds for them in the format (27). Amla was one the best in the pivotal number three position in Test cricket finishing fourth best in terms of runs scored in this slot (7993 runs) behind Kumar Sangakkara (11679), Rahul Dravid (10524) and Ricky Ponting (9904).

Amla made his Test debut in India in late 2004 but his first big break in the format came in April 2006 in his fourth Test. He top-scored for South Africa with 149 in a high scoring draw against New Zealand in Cape Town. Two more hundreds were scored against New Zealand in the home series the following year, but it was only in 2008 that he turned a major corner in his memorable career. He scored 1161 runs in 2008, including hundreds in India and England – two countries where he achieved significant milestones in his 124-Test career.

41 Tests into his career, Amla established himself at the pivotal number three slot for South Africa, serving as the link between Graeme Smith at the top and Jacques Kallis and AB de Villiers in the strong middle order. He was unstoppable in this third tour to India in 2010, where he aggregated 490 runs in the series as he notched up scores of 253*, 114 and 123*.

In the five years starting from February 2010, Amla hit the prime of his career. His aggregate of 3986 runs in this five-year period was the fourth-highest by any player and his 16 three-figure scores were bettered only by Kumar Sangakkara. Among the 69 batsmen who scored 1000-plus runs in this period, Amla’s average of 66.43 bettered everyone. He was often an immovable figure in the middle, getting dismissed once every 124 balls. His career-best of 311* against England at the Ovalcame in 2012 – the first and the only South African batsman to score a triple century in Tests.

The period was one of the most successful periods in South African cricket with them winning 11 of the 17 rubbers and losing just one. South Africa reached the pinnacle of the ICC Test rankings in August 2012 and continued there till January 2016, barring three months in between. In the interim, they won series in Australia, England, New Zealand, Sri Lanka and West Indies in this period – underlining the importance of Amla’s runs in away victories.

Amla’s game in the longest format was built largely on his prowess against spin and it was this quality that bought him to the fore in the sub-continent. In a period when most of the teams struggled to stay afloat in conditions outside home, South Africa was the best touring team head and shoulder above the rest. They remained unbeaten in seven series in Asian shores between 2007 and 2014, winning three and drawing four. The wins were largely built upon the base of a strong batting lineup. Along with Smith, Kallis and AB de Villiers, Amla forged one of the strongest batting lineups in the history of Test cricket and arguably the best for the Proteas. 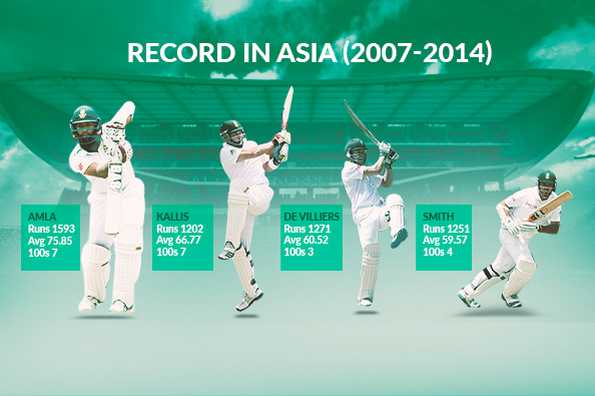 His unbeaten 253 in Nagpur forced India to a rare innings defeat at home while his twin hundreds in Kolkata in the next Test stood out in an otherwise forgettable result for the visitors. He scored a century in each of the two tours to UAE and his 541-minute marathon at the SSC helped South Africa to draw the second Test and thereby register a series win in Sri Lanka in 2014. In the 14 Tests in Asia between 2007 and 2014, Amla aggregated 1593 runs at an average of 75.83 with seven centuries.

Post the semifinal exit in World Cup 2015, Amla’s form suddenly nosedived. In the last 42 Tests of his career, he averaged just 35.56. Asia, a strong bastion at the peak of his career, turned his worst enemy in the last four years of his career. In the last eight Tests in the sub-continent, Amla averaged only 14.25 with a highest of 43 as South Africa were subjected to heavy defeats in five of these eight Tests, with the other three being rain-affected draws.

Amla’s ODI debut came in March 2008, nearly four years after his Test debut at the expense of an out-of-form Herschelle Gibbs. Despite getting labeled as someone tailor-made to play the longest format, Amla’s switch to ODI cricket was astounding to many. Like his Test career, he was slow to start off the blocks in ODIs and was more steady than spectacular in his first two years in the format.

His first break in the format came in the Caribbean in mid-2010 as he piled up 402 runs at a strike rate of 101.25, including two hundreds. He finished the year scoring 1058 runs at 75.57, hitting five centuries and never looked back. It shed all doubts about his ability to switch gears in the shorter formats, and in the next few years, he at the top along with AB de Villiers in the middle formed the two pillars in the South African batting lineup. In the period between May 2010 and the end of World Cup 2015, Amla’s average of 56.90 was only behind that of De Villiers’ 66.78 and Amla’s 19 centuries was only bettered by Kohli’s 20, which took an additional 41 innings.

Among the greatest openers in ODIs

As Amla decides to walk away from the game, he finds a place among the echelons of the greatest ever to play 50-over cricket. South Africa’s ODI success in the first half of the 2010s was largely brought about by the batsmanship of Amla and De Villiers at either end of an innings. Amla was the quickest in terms of innings batted to reach the milestones from 2000, 3000, 4000, 5000, 6000 and 7000 runs in ODIs. Amla’s rate of scoring centuries in 50-over cricket – one every 6.59 innings – is bettered only by Kohli’s 5.56 innings per century. 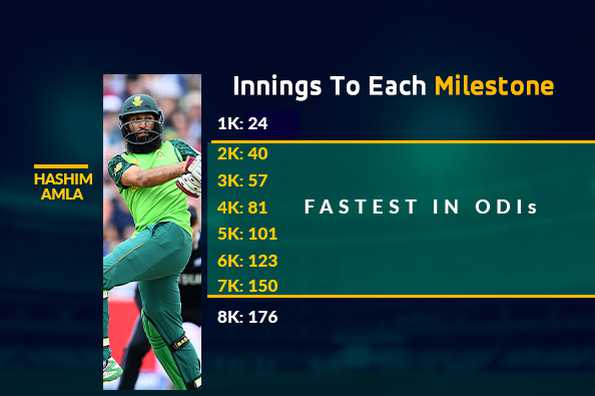 Faster than everyone ©Getty

Amla shaped a successful partnership with Quinton de Kock at the top of the order for the Proteas and the pair has aggregated most runs for them in ODI cricket – 4300. The pair also holds the record for South Africa’s highest partnership in ODIs – an unbeaten 282-run stand against Bangladesh in Kimberley in 2017 which happens to be the highest total chased down in ODIs by a team without losing a wicket.

Like his Test career, Amla’s ODI numbers also dipped following the World Cup semifinal defeat against New Zealand in Auckland in 2015. His average dropped five points from 55 and went below 50 for the first time in eight years and never recovered. One blot in an otherwise illustrious career is his record at the big stage – just like that of South Africa in global tournaments. In World Cups and Champions Trophy games, Amla averages a respectable 40.10, well short of his overall career numbers. Against the top eight sides, the average falls further to 32.95 in the global multi-nation tournaments. 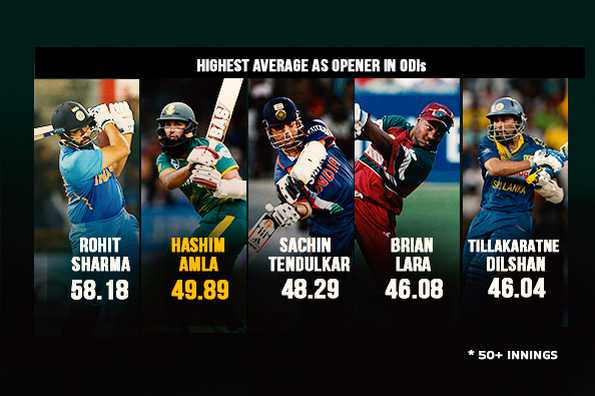 72.35 Average run per dismissal in the partnerships between Amla and AB de Villiers – the highest for a pair in ODIs with at least 1500 runs. The duo has managed to score hundreds in the same ODI five times which is the most such instances by a pair in the format. 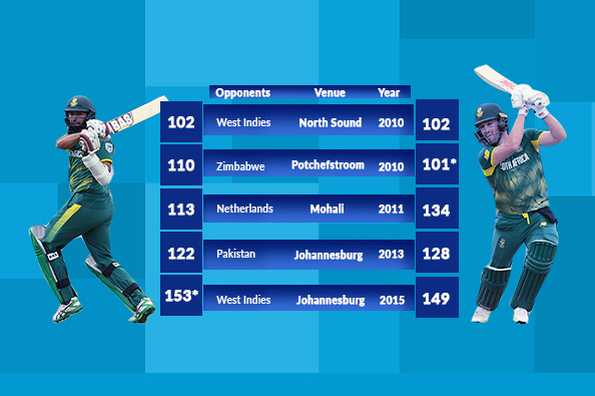 A pair made in heaven ©Cricbuzz

8 Amla is one of the eight players and only South African to score a century in his 100th Test. Amla’s effort came against Sri Lanka at Johannesburg when he scored 134 in the first innings.

1 Amla is the only player to score a double century in his last Test as captain. He hit 201 against England in Cape Town in what turned out to be his final Test at the helm of affairs.

6 Double century partnerships between Amla and Kallis in Test cricket – the joint-most by a pair alongside Matthew Hayden and Justin Langer. The duo was involved in two consecutive 200+ stands on two separate instances – the only pair doing so.

7 Instances of Amla getting dismissed by Josh Hazlewood – his bugbear in Tests. In the seven Tests he featured against the New South Wales pacer, Amla was dismissed seven times in just 193 balls, including a stretch of five consecutive innings during the tour of Australia in 2016/17.