Over the course of a football match, there is high intensity over the 90 minutes or in some circumstances like last night for 120 minutes and then to penalties. However does the best team always win? or does it come down to luck. If I were to ask who was the better team for the 120 minutes last night? Most Real Madrid fans will say their team, however many neutrals will say that it was Atletico Madrid. But in the beautiful game of football this is not always the case whereas the results says otherwise as Real Madrid won their 11th European Cup.

Many people will say that the team that wins the game is normally the better team, whereas the man of the match is normally from the winning team. However last night shows us once again that that may not be true – however Real Madrid fans will disagree with me. And for those who watch the match will know that the man of the match was Carrasco after being brought on at half-time and scored an important goal.

After the match Simeone said “The winner is always right”. “We weren’t good enough to win it on penalties. Justice? I don’t believe in justice when it comes to football. There’s only winning and we lost. The better team won. The better team always wins.” A football manager couldn’t have said it better. But as a football fan one may argue maybe the better team lost. Imagine Sergio Ramos goal in the 15th minutes being ruled offside (as it should), Real Madrid might have still gone on to win, but Atletico could also have won given Corrasco scored later and it was 1-0.

Fine margins is what decides football result, for instance in 1974, a goal in the 120th minute cost Atlético Madrid this trophy against Bayern Munich. Forty years later, a goal in the 93rd minute cost them. Now it has escaped them again, on penalties this time. Barely two minutes cost them two European Cups, an offside goal, a missed penalty and barely two millimetres cost them a third, Juanfran’s shot coming back off the post.Champions League isn’t their thing.

Concentrating on this game last night however, clearly the first goal was offside where Ramos turned over an Atletico defender to score. Ironically the linesmen was right there. 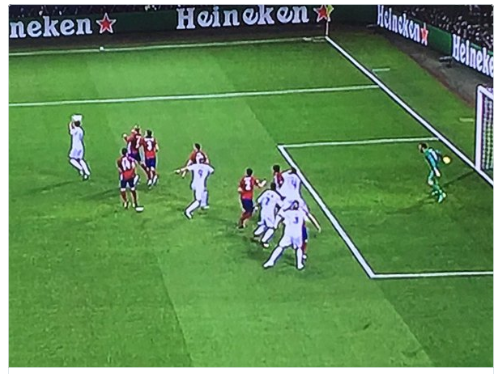 If this goal was ruled offside the game might have turned out differently, however as mention earlier football can be a cruel game at times. After the goal, the game went on with few chances created at both ends and it was 1-0 at half time. Real Madrid slightly had the better half cause of that goal.

In the second half, Pepe idiotically brought down Fernando Torres and Griezmann step up to take it but hit the post, maybe luck wasn’t on their side. Again in the 73th minute referee Clattenberg didn’t book Pepe for simulating getting a smack in the face from Fellipe Luis, as one reporter describe the incident as disgraceful. Finally the ref booked Pepe in the 118th minute in full pantomime villain mode, after chopping down Gabi.

Atlético’s fans erupting once more in the 93rd minute when Ramos brought down Carrasco as he surged past two men and threatened to burst through. Luckily it was only a yellow card. But the all-Madrid final went to extra time again, death and glory from 12 yards.

Most Real Madrid fans will disagree with everything I said so far, however we can agree that Cristino Ronaldo – their best player – had one of the most disappointed game in a Real Madrid shirt as he was anonymous for 120 minutes .

During the entire game he had one shot on target which was a header easily collected by the keeper Olbak.  Yes he scored the wining penalty, but before that, Juanfran missed the decisive penalty and all the momentum was with Real Madrid. Pepe would have likely scored that last penalty with his eyes closed and the headline would have been “Pepe scored the decisive penalty for Real Madrid”.

After the game Ronaldo said “he had a vision” of scoring the final penalty so he went last. However one may say that Ronaldo would have took the final penalty by default anyway -as their best player – and the most likely reason as the next day the headline would have been about him (which it is) scoring the “decisive” penalty after being missing for 120 minutes.

In conclusion, at the end, there was applause from Atlético’s fans and no reproach at all. Not for their players, at least, whose eyes were lost in tears and they stood motionless staring into space, assault by disbelief. There might be reproach for this competition, though, so cruelly has it treated them.

The European Cup has been the making of Real Madrid, 11-times winners, and the breaking of Atlético Madrid, the knife slipped in once more. Slipped in and then twisted. As they learn that football can be a cruel game as they deserved to win.

With all that being said, at the end of the match, there is a winner and a loser, the winner was Real Madrid and the the loser was Atletico Madrid.